Home / Blog / Twitter :Twittergate aka #riptwitter, what can we learn? 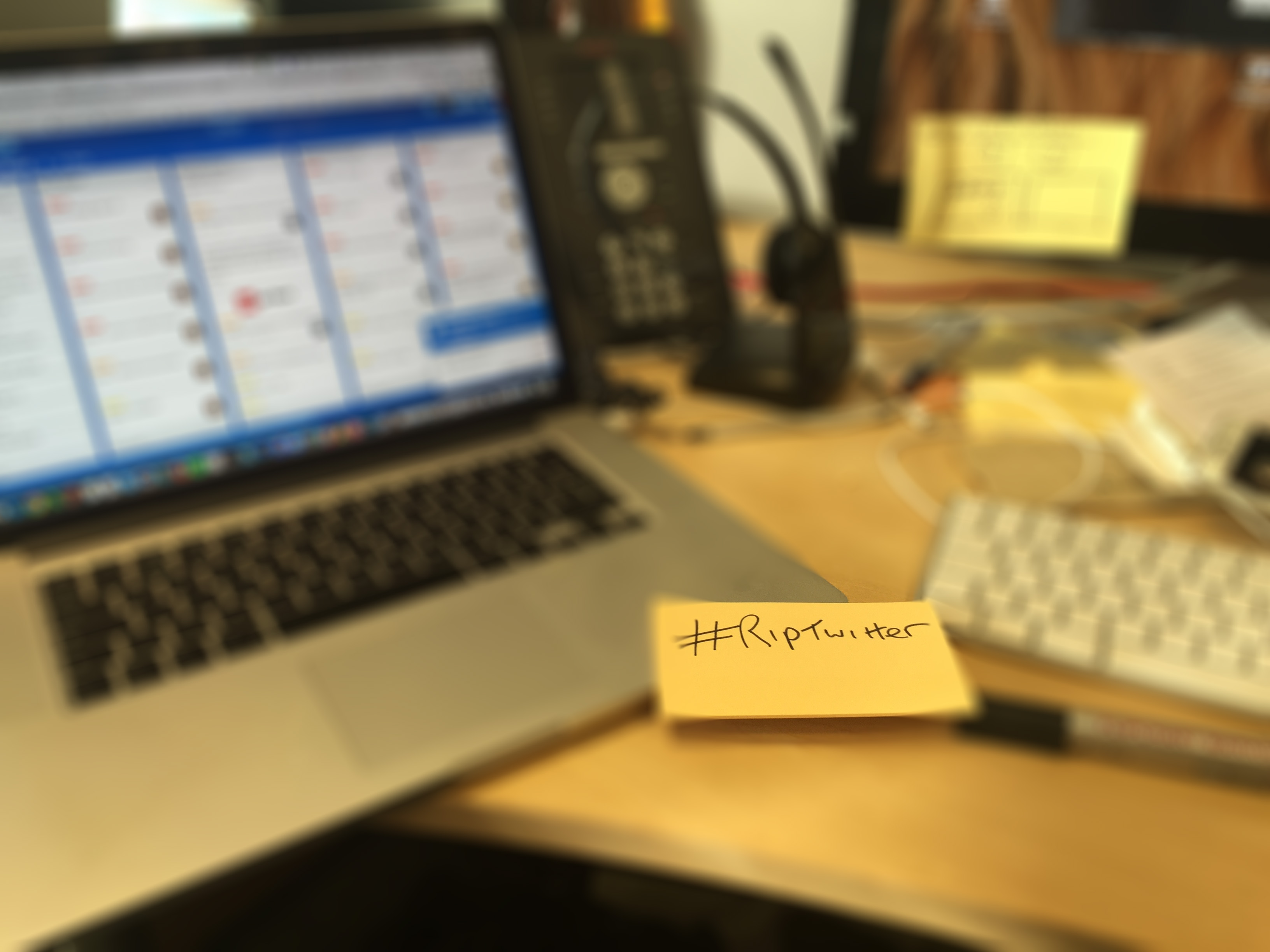 I don’t usually write topical blogs, I prefer to keep my blog more evergreen.  I also enjoy the challenge of not directly calling out companies but rather have the reader guess who it could be, but in this case I can’t really do that. Also, as someone whose blog uses Twitter as a primary method of promotion, of course I am going to have an opinion.

In case you haven’t heard, a Buzzfeed article surfaced leaking planned changes to the Twitter platform as we know it.  I won’t comment or speculate on rumours but needless to say the changes did not sit well with the Twitter community.

The response has been deafening: #RIPTwitter trended for two days; a senior Product Director ended up in a very red faced, very public, open argument with the twitterverse; and the share price is at an all time low.  It’s fair to say Twitter is going through a rough patch.

But leaked documents and PR disasters aside, I am going to look at some themes Twitter has shown over the past 18 months or so.  I will highlight the good points and most importantly the lessons all product teams can take away from this.

It’s not all doom and gloom, but more of a combination of “delayed successes” and lessons learned.

“If you build an amazing product you can make money off it later”.  This was a mantra I used to believe heavily in for years, I didn’t want to think about how we would make money off stuff, I worked in organisations where there would be sales teams who would do all that for me (or at least attempt to).

Twitter relied on private backers to first get off the ground and never really focused on how it was going to pay its way until years after being out there.  So around 3 years ago Twitter expanded, I mean really expanded, they had offices based all around the world with tons of teams trying to figure out the million-dollar question “How can this blue bird make us rich?”

Facebook had a similar transition a couple of years previous when it floated on the stock market. Facebook went through a mini renaissance of advertising exploration: sponsored posts, video algorithms, pinned posts, sticky right hand rails all combined for a truly socially “native” experience. These changes fundamentally changed Facebook’s avenue streams and now 80% of revenue is now generated because of these features. I wouldn’t call this new or sexy, but it works.

Twitter looked on with envious eyes, so they set out to recreate this but that’s the problem, Twitter can’t. The sort of advertisers who pay the big bucks for these campaigns and who will continue to pay the big bucks don’t necessarily care about the quantity any more, but more of the quality of the clicks. The product purely was designed to show real time tweets and that’s about it (and that’s OK! I have another blog I really want to write about keeping things simple but I digress) due to the number of twitter bots/ fake accounts/and autonomy to the platform.  It’s near impossible to serve up a more contextual experience to the user without asking them directly. Yes you still get the odd promoted tweet but nowhere near the level of complexity you get with Facebook.

But before you think Facebook was perfect, Facebook would have had similar problems, they would have MVP’ed the same as the rest of us but they iterated quickly. And they didn’t do all this at once, it was over time after getting each one right.

That leads me to the next point:

Make one thing really good, not loads of rubbish things

Clearly this doesn’t remember my preference and remove it for next time, I hope it at least tallys my vote somewhere so they are actually making use of the data. But my point is when you ask the user did you like something? It’s fair for the user to assume that you have an unwritten contract that the thing you don’t like won’t appear again.

What they have here is not an MVP, the MVP (perceived by me, the user) is that by asking me if I liked it or not that I will not see that again. I get the impression of some form personalization, customization, where maybe at some point down the line using this data they can tailor communications for me and maybe monetize the site better.  But no, I still get the same message.  So instead of improving that customisation experience, what do I see next as a user?   I see a Frankenstein’s monster of half-baked ideas desperate to find its way.

You have spent the best part of 10 years building up a reputation in social media culture. ‘Favs’ had a purpose, these are my favourites, just like on a web browser where you save the URLs of your favourite sites, when I click on my ‘Favs’ I see the Tweets I have wanted to keep as a record.

The term ‘Like’ has spent equal time in social development by the big blue F. ‘Like’: I endorse this; I approve this; I find this amusing; I want my friends to see I like this. Likes are outward facing where Favs were inward.  So when Twitter changed the name of Favs to Likes, the user was confused about they should be using them for. When I “like” something on Twitter now it isn’t shared with my followers like I would expect.  My takeaway from this lesson is that if you are going to change the wording or meaning of something on your product, make sure it’s consistent with what the user expects.

I want to be clear with this point, I do not mean basic expectations of a product, establishing you know what your basic expectations and delivering on them will work for everything. The feature I am talking about here is “Moments”. Over the past year Facebook, Google, and Apple have started to showcase content through an in app experience (there is a argument that Apple worked on this years ago with News stand long before Apple news but for the purpose of this blog lets keep it simple). Facebook and Google have gone as far as to create their own bespoke platforms where they control the flow/styling/and coding of content with FB instant articles and AMP. Snapchat also have a content platform in “Discover”.  Everyone wants to be in the business of content provider as well as social media platform.  I will say that each platform (except for moments) has made a clear reasoning as to why they wish to do so. For FB and Google it was to provide a media that loads instantly on your phone, for Snapchat it’s to show video content from providers in the same tone and experience that is consistent to the messaging platform. Twitter seems to just take posts from media outlets you follow and display them in a different UI, no reason to do it, no obvious benefit or an explanation into what this is.  When you launch a product you will need to hand hold your audience, especially an international audience.

Hindsight is a wonderful thing and I don’t want this blog to come across as a I am kicking the blue bird when it’s down, far from it, I love this platform and I really want it to be around in 10 years time.  But like with all products, if you don’t observe the lessons learned you would be doomed to repeat them.